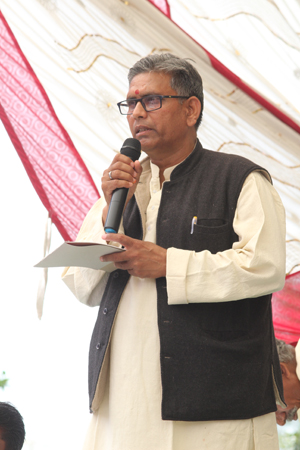 ABSSS Director Bhagwat Prasad passed away on August 9, 2018 at the age of 49 years. On that unfortunate day while he was taking a meeting of the organisation’s workers at Manikpur office, he suffered angina pain around 10.30 in the morning. He was rushed to Chitrakoot, where despite medical assistance at government and private hospitals he passed away at 1:30 in the afternoon. He left behind wife, a son and a daughter.

Bhagwat Prasad’s life was full of struggles and challenges. Born in Lama village of Banda district he did B Com and LLB from Allahabad University and Postgraduation in Rural Management from Tata Institute of Social Sciences, Mumbai. He came in contact with Gopal Ji while he was studying and chose to work with ABSSS. When Gopal Ji thought of retiring, the mantle of the organisation passed to him.

He chose to tread the risky path of uplifting people, providing new meaning of life to thousands of people, instead of adopting conventional path of comfort. He successfully advocated for the last person on the ladder with government, administration and court. He got thousands of acres of agricultural land of tribals and non-tribals freed from the clutches of dominant people of the area. He successfully associated these land owners with agriculture.

Bhagwat Prasad did commendable work in water management and water conservation. For this he received second prize from Federation of Indian Chambers of Commerce and Industry (FICCI) giving international recognition to the organisation. The award ceremony was held at FICCI house in New Delhi on November 28, 2017.

His efforts to promote cultivation of paddy, vegetables, fruits, particularly pomegranate, on the small landholding of the poor in Chitrakoot, Banda, Tikamgarh and Anuppur districts have been largely successful. These ideal environmentally sustainable and replicable efforts have been hailed by many renowned people of the country. His efforts to make minor forest produce like mahua, amla, chiraunji, honey, etc., basis of livelihood have been largely successful.

This tribal area has always lagged in education. He established education centres in many villages and lighted the flame of education. All those who have seen his efforts have only praised them. Many people in foreign countries have extended helping hand.

He was institution builder at par. He helped many of his colleagues to move out of ABSSS and establish at such places where humanity was groaning and work was needed. His services were always available to all the people from voluntary sector who came in his contact.