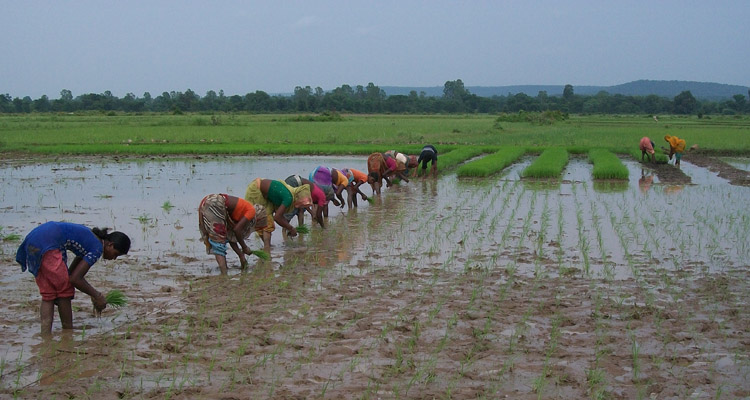 Thanks to water management, crops like rice are being cultivated in Patha region

Of the three natural resources, land and forests are highly degraded and water is in short supply in the patha region. This is because of the region's peculiar geographical setting. The land is uneven and full of stones, while a perennial shortage of water has dwarfed the growth of vegetation, including forests. Moreover, access of different segments of the populace to these resources is highly skewed - the dominant people, numbering a very few, control most of these resources, while the majority of people are excluded.

Natural resource management should be seen as an extension of the land issue in ABSSS’s scheme of things. Many families became farmers only recently, following the patta programme. Often, this land is degraded and these new farmers have worked very hard to make it cultivable. But ensuring irrigation to these fields has been a daunting task.

ABSSS took up small-scale irrigation works to provide maximum benefits to weaker sections. In 1986-87, ABSSS started constructing wells and repairing tanks. These efforts have made water available for irrigation, for drinking for human beings and for animals, and for fishing. Between 1991 and 2001, ABSSS constructed water conservation bunds and check dams. The most concentrated efforts were in the Tikariya gram panchayat area, which benefited about 300 families.

In most places the irrigation work taken up by ABSSS has proved highly cost effective and directly benefited farmers from weaker sections. This should be seen against the experience of some big and medium projects taken up by the government in this area which have yielded hardly any irrigation benefits.

Large-scale seepage has been reported from several of these big structures. Villagers say their advice about local conditions was not heeded, which led to problems later on. Massive corruption in the construction works was also alleged. Even small-scale irrigation works by the government such as check dams have given very disappointing results. In some cases, these have been washed away or damaged badly by the rains. In other cases, the benefits have accrued mainly to big landowners.

The availability of clean drinking water is also an essential part of food security. This region experiences extreme water scarcity and people have to fetch water from long distances and from sources which cannot be considered clean. ABSSS’s work has contributed to reducing the drinking water storage. In areas like Tikariya where several check dams have been constructed and repaired, the ground water table has gone up so that it is easier to obtain water from wells and hand pumps even in the months of scarcity. Several small irrigation works taken up by ABSSS also meet drinking water needs of people.

There are several springs or small rivulets around which a small structure is built to keep the water clean. These water sources are called chauhras. There is considerable scope for providing water to several families at a low cost with the help of chauhras. From 1987-88 to 1999 ABSSS constructed 29 chauhras.

Forests in the area abound in timber and non-timber forest produce. The forests have been overexploited because of the unholy nexus between the forest mafia and contractors, while the very people whose lives depend on the forests are increasingly excluded. As far as non-timber forest produce is concerned, it was collected by the tribals, while benefits were usurped by contractors and the employees of the Uttar Pradesh Forest Corporation. With the efforts of ABSSS, tribals are now getting a fairer deal.

Knowledge relating to medicinal herbs which are found in these forests is incorporated into the educational programmes of ABSSS so that the younger generation is conscious of their health benefits as well as economic potential. ABSSS has also encouraged Kols to plant a medicinal garden in Tikariya panchayat area with 566 trees and several medicinal plants. In addition, about 3,000 trees have been planted in smaller lots. Species are chosen that are suitable for the environment as well as adding to the income and food security of people. Chemical fertilisers are not used.