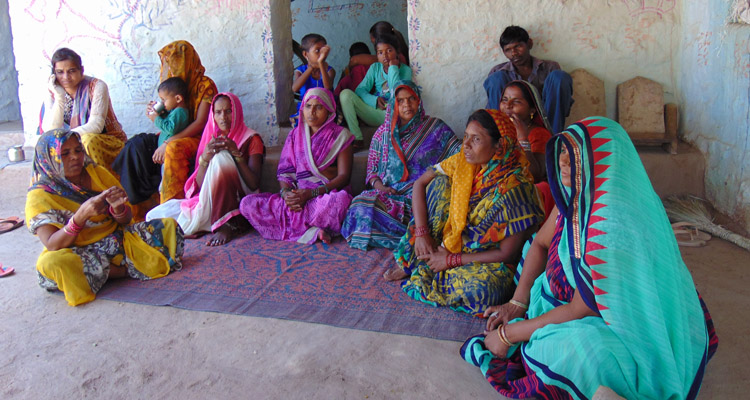 A glimpse of a village meeting on entitlements

The Bundelkhand region has eight of the 108 poorest districts in India largely inhabited by tribal and dalits. The rampant poverty has resulted in powerlessness and reduced access to livelihood resources for a large section of population, particularly related to land (for details of land issues, click here). This process for years has created social exclusion of tribal and dalits, who have not been able to avail their rightful share of resources in improving livelihoods.

Of nearly 600,000 population of Chitrakoot district, Scheduled Castes and Scheduled Tribes account for more than a quarter. The share of SC and ST population in Manikpur and Mau blocks, where ABSSS works, increases to nearly one third, though there are allegations that population of SCs and STs, many of whom reside in small hamlets, has been underestimated. Most of the SCs include Kol tribals, recognised as ST in neighbouring Madhya Pradesh and other states, but classified as SC in Uttar Pradesh because of some administrative lapse after Independence.

Till about 100 to 150 years back, the ancestors of Kols owned most of the land in this region. However several unscrupulous persons came from outside to settle here and taking advantage of the unfamiliarly of Kols with the formal system of government and law, they were able to grab a lot of land. In the initial stage probably the Kols did not even bother as there was plenty of vacant land available, but within few generations they lost most on the land cultivated by them. The Kols were reduced to working for the new big landowners at subsistence wages, generally one kg of coarse grain per day and in addition sometimes a small piece of land. Even Kols who had some land could not give it priority as attending to the needs of landlords was made their first priority. Thus, majority of Kols were reduced to labour with big landlords, who were also forest contactors, for very low wages in conditions of near bondage.

In the immediate post-Independence period there was a ray of hope, which proved deceptive and did not last for long. It was in the shape of land-reform and land redistribution, aimed at providing land to Kols and other weaker sections. But the influential landowners colluded with corrupt officials to retain portion of even that land which was allotted to the poor. Big landlords told officials to distribute the land to their bonded workers and in many cases did not even tell the workers that any land had been allotted to them. In many cases the big landowners continued to cultivate the land as before, paying sustenance wages to workers and reaping huge profits for themselves. Any resistance was put down with a heavy hand.

The situation till 1990 was that most of the Kols had been unfairly deprived of their land and even if they had some, they had to work in condition of near bondage for the big landowners. This servitude also extended to forest based work. They had to work at low wages for forest contactors who came more or less from the same class, or else they had to sell the non-timber forest produce collected by them at a very cheap rate. There was no escape for them from this life of exploitation. Even if well paying work was available from distance away, they could not go this work if their services were needed by the landowners at the same time. Women also had to toil in the fields as well as the homes of big landowners.

According to an official survey by Uttar Pradesh Development Systems Corporation about in 1980s, out of an estimated total 7,336 SC households in Manikpur block, about 2,316 were bonded. Of these 45 per cent were found to be bonded for over 10 years. Thus it is clear from this survey done by government's own researchers that the incidence of bonded labour was very high in this region. The condition of SC landless or near landless workers was also quite bad, although they were in a slightly better position to interact with the formal system of governance.

ABSSS has accorded very high priority to land distribution among Kol tribals and other weaker sections. Before 1990s most of the Kol tribals either did not have nay land, or else they were not able to cultivate it as they were mostly at the beck and call of big landowners. It is to the credit of the ABSSS that today the majority of them are small formers cultivating their own land with full confidence. ABSSS could achieve this transfer from workers to small farmers by ensuring that most of the landless kols received land, taking several steps which resulted in loosening the hold of landowners over Kols and resisting the bondage like conditions, and creating irrigation facilities to provide water to the fields of small and resourceless farmers.

The land distribution effort has targeted two types of lands. The first type included distribution of village community land to the poor. The second type included land already belonging to Kols in government records, but actually cornered by big landowners. This category of land raised difficult issues. ABSSS approached the administration again and again to initiate action so that this land can return to its rightful owner. It was a long, complicated and frequently very frustrating process.

Rural entitlement has been a critical issue for years. Development priority of ABSSS has been to reinstall the entitlement of such forcible encroachments. This is being done through: