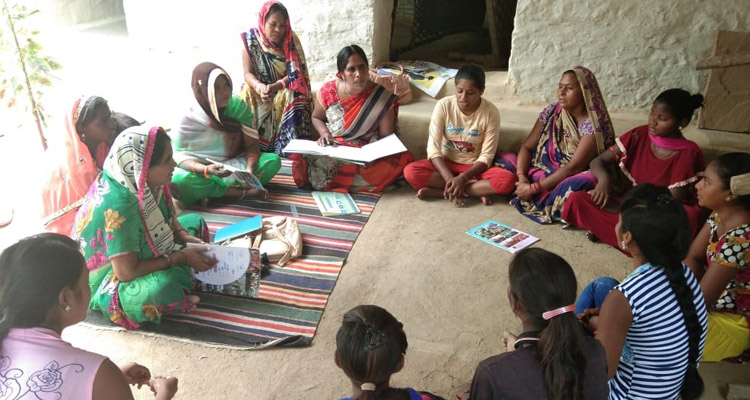 A meeting of women underway in one of the villages

Although the Constitution of India guarantees women equal rights with men, women do not have equal rights in the prevailing social pattern, which invariably accords a higher status to men. Gender disparities are evident in many aspects of Indian society. Statistics for health, education, poverty, domestic violence, representation and other indicators of quality of life show the severe disadvantages that most Indian women experience.

Women in the operational area of ABSSS are traditionally exploited. The situation of tribal women in this respect is worse as they are doubly marginalised - by being tribal and being women. They work 18 hours a day, migrate with their families in search of work, and yet do not have a role to play in the household and social/community decisions. They use the resources, but have little say or control over their use. Women do not participate in decision-making whether at the informal level in the village, or more formal decision-making. As a result, women continue to be passive recipients.

Exploitation of women is very high in this region. Not only do they face the drudgery of household work and labour in the field, they also face sexual harassment, which, very often, is an outcome of their financial vulnerability.

Women’s empowerment is a broad issue for ABSSS. A multi-pronged strategy centred round the following is being adopted to empower women:

Small groups of women called Chingari (which means ignition) groups have been formed all over the operational area. These groups are the big platform for women's advocacy. These Chingari groups have intensified the process of awareness among women on rights-based approach and knowledge of laws and rights. Many training camps, workshops, campaigns etc, are organised at the grassroots level as well as organisational level.

With the effort of ABSSS, women panchayat representatives in the Bundelkhand region are now more informed about their powers and they actively participate in gram panchayats and gram sabhas.

ABSSS uses self-help groups as a medium for social, economic and political empowerment of women and as an instrument of advocacy, which is focused on basic entitlements such as land, property and information. Many SHG members have started income generating activities for long term sustainable development.