Water Wise: The Journey from Bonded Labourers to Water Warriors

Impoverished tribals (bonded labour) living in Bundelkhand (one of the most drought-prone and backward area of Northern India) show how barren and deserted land can be revived and made into a fertile land by simply working unitedly.

The Bundelkhand region was prominent for their rainwater harvesting structure, being home to a succession of enlightened kingdoms through the millennia, the kings of the Bundela dynasty built and maintained innumerable rainwater harvesting structures, which ensured abundant supplies of water throughout the year. The water bodies were mostly ponds and tank (small,medium and large) which got filled up during the rainy season and which in turn recharged the groundwater. Thus, the wells in the villages had plenty of water throughout the year. Even in the years when the monsoon was below normal, there was no shortage of drinking water for humans and animals. The degradation of such ponds and catchment areas, encroachment on forest lands, deforestation and lack of avenues for storing the rainwater have wreaked havoc on water availability. The net result is that the wells which were once used for drinking and irrigation are not providing enough water now. Bundelkhand has become famous for its poverty, drought, farmer suicide and politics on water, employment and relief.

The kol adivasi (kol tribals classified as schedule cast in Uttar Pradesh and schedule tribe in Madhya Pradesh) of Manikpur block of Chitrakoot district of Bundelkhand region had obligated to spend their life as a bonded labour. In 1997 after being released from the bondage, they got lands and began farming (The government issued pattas of land to landless kols). However, the lands allocated were degraded and barren and the kol farmers had no idea how to increase the productivity of the land. From 1997 to 2008, they used less than 5 per cent of their land for agriculture purposes and cultivated only sorghum and pigeon pea. 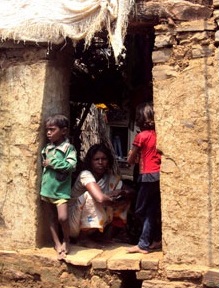 Santo Devi, village MangawanAgriculture in this region is dependent on the rainfall which is unpredictable. Usually the wells, which were the single source of drinking water dried up during the summer months resulting in acute water scarcity. The women folk had to travel everyday to fetch water from rivers. "Sometimes we thought to ourselves that our living conditions were better when we were bonded labours, however with our husbands shifting to agriculture and lack of water availability resulted in irregularity in earnings. Our condition now is disastrous" said 37 year old Santo of village Mangawan in Manikpur block.

As a result of the scanty monsoons in a row, the kol tribes had crop failures and this forced them to consider rainwater harvesting as a solution to the impending problem. However the farmers did not have the technical knowhow for the same.

In 2008-2009, Akhil Bhartiya Samaj Sewa Sansthan (ABSSS) a nonprofit organisation based in Chitrakoot, started a project in Mangawan, Bambia, Tikaria Jamunihai and Doda Mafi villages to improve the agriculture, livelihood and water situation in these villages. These villages are located in ‘Patha’ plateau in the agro-cliamtic region of Central Plateau and Hills Region. Forty three year old kol adivasi called Bhau (from Mangawan village) was the first farmer from kol tribal community to start farming with the help of ABSSS and the state government in 1997. Bramin another adivasi from the same village gave a part of his land to make a water pond to sustain the nearby well and to support irrigation. Slowly all the tribal families of all the four villages started to build farm ponds, ponds, check dam and gully plug to conserve rainwater. Within a short span of three years the kol farmers were benefited and in spite of low rainfall, almost 61 farm ponds and ponds had overflowed with rainwater and the wells did not up dry up during the peak summers. Eventually the crop production increased many folds. 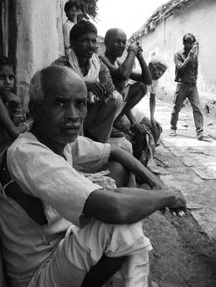 Water warriors, village MangawanThe road to success for the Mangawan people has not been an easy one. The villagers of Mangawan had been suppressed and had lived for a very long time under the fear of the powerful landlords (dadus). Sajla Samiti was successful in winning their trust. "The biggest achievement for the samiti has been that they have been successful in reducing the migration rate of the villagers and now the local people are happy and content that they get water and livelihood at their native place", exclaimed Bhagwat Prasad.

"Behind the success of the kols in Patha plateau (Chitrakoot), is their strong unity. The Sajla Samiti played a strong role in building active committee, comprising of 51 men and women belonging to the kol tribes and the scheduled caste communities, " said Gopal Bhai, a social activist and founder of ABSSS. They have been working in the region since 2009 added Gopal. The Sajla Samiti is instrumental in uniting and spreading awareness in the four villages during the period of 2009 to 2011. As a result of the initiative taken by the samiti the schedule tribes and schedule class communities of the villages have come together and made a number of check dams and farm ponds in their lands to conserve water and prevent soil erosion, under the watershed development programme commenced by ABSSS. The groundwater levels in these villages have increased due to the water conservation actions undertaken by the local people. The groundwater level has raised by more than 2 meters. The well water is now being used for crop irrigation as well as drinking and other domestic proposes. Almost 35 households in the village irrigated over 201 bighas of agriculture land in 2011-12.

"Since 2010, we did not face drinking water scarcity, I am happy because I do not have to go outside and walk for 3 to 4 kilometres to arrange water in the scorching heat. There is enough water for domestic needs, cattle and irrigation proposes. My time is saved and health has improved and I can spend that time in my field says Santo of Mangawan.

"We had started to build check dams and ponds in our land. Our main objective was to use the rainwater for irrigation and not let it flow out and get wasted. ABSSS and Sajla Samiti members helped us and gave us the technical knowledge. Initially I was apprehensive. We had bumper harvest crop and there is enough money, food and water for my family to live with content", said Harish of the same village. 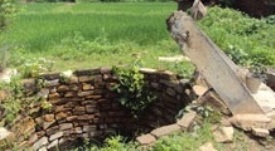 Well full to brim and green farm land in Mangawan.Despite poor rainfall in Patha plateau, drinking water is available throughout the year at an accessible distance. The farmers follow good agriculture practices and are able to secure yields equal to or higher than the average yields reported from the state of Uttar Pradesh. There is a clear evidence of the benefits of water conservation in such degraded soils. ‘I am happy, I bought 250 grams silver to give my daughter on her wedding, next month, said forty three year old Bhau, a small-built kol adivasi of village Mangawan. 15 years back he could not even afford a simple sari for his wife and medicines for the children. I used to manage with difficulty only two square meals for my family and earned 1 kg food grain a day against fifteen long hours of manual work under the scorching sun he added.

By Shehfar in Centre for Science and Environment (CSE) Web Portal