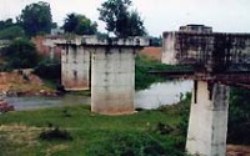 Incomplete bridges and roads; public hospitals without doctors or medicines; schools without teachers. These are familiar sights in Uttar Pradesh.

They are symptoms of poor governance and a weak civil society. Economists Jean Dreze and Haris Gazdar describe this condition as 'inertia'. In a study, Uttar Pradesh: The Burden of Inertia, published in India Development: Selected Regional Perpsectives (OUP; 1997), they argue that it is this inertia rather than poverty or low public expenditure that is the major cause of backwardness in UP and the rest of north India.

People of 30 villages organised an indefinite protest, which included hunger strikes, meetings in temples, rallies and distribution of pamphlets. The protest was started on November 13 in the busy market area of Kartal, an important small town in the block. The pradhans of over a dozen gram panchayats, and several panchayat members and villagers sat on a relay hunger strike at the bus-stand.

The agitators had 12 demands for the local administration. All the demands were related to inadequate or incomplete development work. For instance, the first demand was that work on a bridge across a minor river called Pungri should be completed. Connecting UP to MP, the bridge had been left incomplete since 1992. The agitators' memorandum said: "This is an insult to public interest, a deceit on voters and a case of government negligence."

The agitators kept up the pressure for 11 days, till the district magistrate (DM) and collector of Banda agreed to talk to them. One of the results was that work on the Pungri river dam officially recommenced.

The agitators belonged to an information organisation called Chingari Sangathan. Comprising public-spirited citizens, panchayat members and members of self-help groups, Chingari Sangathans have been started by a PACS Programme partner, the Akhil Bhartiya Samaj Sewa Sansthan (ABSSS), in many parts of Bundelkhand through its network partners. The Chingari Sangathans work as local pressure groups.

The Chingari Sangathan in Naraini block was initiated by a small network partner called the Paragilal Vidhyadham Samiti (PVS), which works in 13 gram panchayats.

In the initial survey it conducted for the PACS Programme, PVS identified several instances of incomplete development works in the project area.

Subsequently, by forming and supporting the Chingari Sangathan, it has succeeded in making development a major local issue.

Due to the Chingari Sangathan's agitation, work has started on a 3-km road joining Kanai and Rampur villages. A sum of Rs 18 lakh had been sanctioned and 'spent' on the road - but there is no road to be seen. Likewise, an eight-bed hospital that had been running empty for 20 years in the premises of a powerful person in Panchampur village now has a doctor visiting.

In this atmosphere of public concern, PVS has also been able to initiate development work through voluntary, unpaid labour. In Mahrajpur village, women and men toiled for 11 days to clean up a large pond spread over 84 bighas.

There has been an unusual impact in Kanai. After the PVS organised awareness meetings and exposure visits for some panchayat and SHG members, the village now has a sizeable group of people who have decided that in the next panchayat elections, only deserving candidates should be elected, unopposed.

Explains Ram Avtar Patel, a panchayat member and leader of this group, "Our panchayat has been totally ineffective as the pradhan, who is a dalit, is powerless, and the other members are split into groups. For the last two years we have had no meetings. Now we are proposing that for the next elections we should select only those people who are interested in doing public service. We will ask each community, like the Brahmins, Thakurs and scheduled castes, to nominate one or two members, according to the proportion of their population. Then we will ask the elders to screen the candidates and the people will unanimously elect all our representatives."

Ram Avtar admits the proposal sounds idealistic. But even if it fails, the village will have a powerful pressure group, he says. "We will keep the elected members on their toes. We will regularly ask them questions about the panchayat's income and expenditure."

Asking such questions is the first step towards ending the state of inertia in UP.