UP Tribal Groups Ignored by Policy-Makers 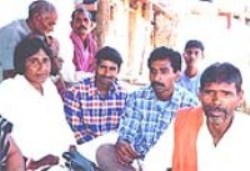 An imaginary line divides the Kols, a tribal group with a population of around 3 lakhs living in the Bundelkhand region of Madhya Pradesh and Uttar Pradesh.

Kols living in north-eastern Madhya Pradesh enjoy the status of a scheduled tribe (ST), which gives them access to reserved posts in elected bodies and government jobs. They can also get the benefit of welfare schemes for tribals.

However, across the border, in southern Uttar Pradesh, Kols do not enjoy ST status. In many border villages, the distance between Kols who enjoy ST status and those who don't is less than a kilometre.

This gross anomaly reflects a deep lack of clarity in government policy for STs. Dr BD Sharma, a well-known authority on tribal affairs, describes it as one of "confusion, unconcern and dereliction" (Tribal Affairs in India; Sahyog Pustak Kuteer, New Delhi; 2001).

As Dr Sharma notes, the confusion stems from the first step: according ST status, or 'scheduling' tribes.

The existing policy is derived from the policy of the British colonial rulers. Unable to gain control over large areas of the country with a tribal population, they deemed these areas 'non-regulated'. This basically meant that these areas were excluded from British laws and administration.

The power to declare an area as 'scheduled' vested with the President. Accordingly, two Presidential orders were issued in 1950. The exercise was done perfunctorily. For instance, as Dr BD Sharma points out, "In the largest tribal district of the country, Bastar, only two and a half tehsils out of eight were scheduled with no ostensible reason for differentiation."

The Constitution also gave the President the right to specify tribal communities as STs. There were two important riders. Firstly, the Constitution did not envisage according ST status to a tribe for the entire country; ST-status was specific. Secondly, even within a state or a tribe, some groups living in some areas could be given ST status, while people of the same group living in other areas could be denied it.

The apparent reason behind such a provision was that ST status has to be linked to backwardness, which was a "transient phenomenon". The fundamental principle was that STs had to advance and assimilate with the development processes of the rest of the country. Accordingly, the Constitution gave the President the power to "deschedule" an area or a tribe after it had recorded progress.

The process of "scheduling" tribes after Independence was done with the help of census reports prepared meticulously every ten years since the mid-19th century. However, political interference seemed to have played a big part. Hence, groups located in forest areas of UP along the borders of MP got classified as scheduled castes (SCs) rather than STs. According to Dr BD Sharma, the tribal identity of these groups was "beyond doubt"; they in fact lived in areas that were 'excluded' by the British.

Dr BD Sharma adds that the worst sufferers were tribal groups in Sonbhadra and Mirzapur districts of UP and the Kols, who live in the Chitrakoot-Allahabad belt.

According to Gopalbhai, founder of the Akhil Bharatiya Samaj Seva Sansthan (ABSSS), who has worked with the UP Kols for over 20 years, they were originally residents of forest areas of MP, who were forcibly brought to UP during British colonial rule by forest contractors as cheap labour. Many Kol settlements in UP were known by the name of the contractor who brought them - for instance "Prakash ka zilla".

The Kols do not have any memory of a language of their own - they speak Hindi. However they have social and cultural practices which set them apart from the mainstream. One distinct difference is in the position of women. Explains Gopalbhai, "There is no dowry system among Kols. It is the boy's father who has to please the girl's parents. Then again, if a married woman leaves home for whatever reason and then returns, she is accepted."

The Kols have little social contact with other communities, even if they live with them in the same village. "During a marriage feast in a village," Gopalbhai says, "Kols will sit separately."

Significantly, and unfortunately, the Kols have little interest in land. As a result, when the forest contractor system was abolished, the Kols were left with no means of livelihood except the small patches of land they had occupied in the past for cultivating foodgrains.

For years after Independence, Kols and other tribal groups living along the UP-MP border were left out of all development programmes. When Gopalbhai first visited Kol areas in Manikpur block of Chitrakoot in the mid-1970s, he found no roads, no electricity, and harsh exploitation of every kind by large landowners, including sexual exploitation.

Due to the efforts of the ABSSS and some sympathetic government officials, the situation today is quite different. There are some primary schools and some tarred roads. Importantly, the Kols have a civil society organisation of their own, the Patha Kol Adhikar Manch (click here to read a story about this organisation).

However, the Kols remain by and large on the borderlines - economically, socially and politically. It is in such a situation that the issue of ST status is critical.

Gopalbhai states that all the main political parties in UP have at various times assured the Kols ST status. However, there has been no follow-up. There are no strong political reasons to consider tribal issues in UP: Tribal groups constitute less than one per cent of the state's population.

The general indifference to Kols, Sahariyas and other marginalised groups in the state was clearly seen during the 2005 UP panchayat elections.

ABSSS director Bhagwat Prasad points out that Sahariyas in Lalitpur district were initially not given the right to contest even SC-reserved seats in the 2005 panchayat polls. They had to contest general seats. A last minute announcement changed this position, but few candidates could benefit from it. The result of this bungling was clearly seen in 13 gram panchayats of Madawara block of Lalitpur covered under the PACS Programme by an ABSSS partner, Bundelkhand Sewa Sansthan. In 2000-05 there were two pradhans and 23 ward members from the Sahariyas in these 13 gram panchayats. After the 2005 polls, there are no Sahariya pradhans or ward members in these panchayats.

The Kols of Manikpur block, where the Patha Kol Adhikar Manch is very active, fared better. In the 62 gram panchayats of this block, 17 Kols got elected as pradhans, including four from general seats and five women.

One of Kol women pradhans is Sanjo from Gidurha gram panchayat. A key member of the Patha Kol Adhikar Manch since 1994, she was certain to win the elections.

However, some large landholding upper caste families in her village allegedly moved the local administration to remove the names of some of her supporters from the voters' list. Sanjo fought back, making repeated pleas to higher officials, who initially refused to listen to her. Eventually, Sanjo got elected with a handsome majority. Seven of the nine ward members belong to her 'party'.

But Sanjo is an exception. Her life has been one of courageous and determined struggle against adverse circumstances. "I have been working since the day I was conscious," she says. Along with her brothers she used to work for eight months in a year in stone quarries, returning home during Holi. After she got married and her husband left her to live with another woman, Sanjo brought up her daughter on her own. She helped set up self help groups, and along the way, learnt to ride a motorcycle and a tractor.

In the absence of an enabling policy and political environment, the future of Kols and UP's other marginalised groups is heavily dependent on people like Sanjo. It is a heavy burden for any individual to carry successfully over the long-term.