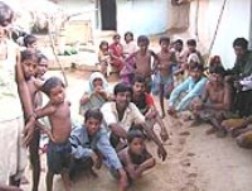 For as long as they can remember, the 14 families belonging to the Dom caste in Nidhuwa village in Naraini block, Banda district, Uttar Pradesh, have been treated as less than human.

Since the dawn of recorded history in India, the Doms have been treated as outcastes. In ancient Hindu and Buddhist literature, the term 'Dom' or 'Domba' was used for a segregated and enslaved population. The word was also synonymous with the more popular term in ancient times, 'Chandala'.

People identified as Doms have long been workers at cremation grounds, scavengers, weavers of ropes and baskets, and musicians.

As they are associated with 'unclean' practices, the Doms of Nidhuwa live in a dirty quarter segregated from the village.

Illiterate and ignorant of any government schemes, they are out of the development process. Although some Dom children in Nidhuwa do go to school, they are not encouraged to sit and eat with the other children. There is a handpump in the Dom quarter that was out of order for a long time. The Doms could not use the other handpump in the village; they had to fetch water from a nearby river.

Instances of Dom women being abused and molested were routine in Nidhuwa. Young Dom women were also forcibly taken away by powerful people in the village and sold to flesh markets in big cities. These women have never been traced. No Dom had ever dared protest or lodge a police complaint. Says Kela Mehtar, whose wife was taken away in 2004: "Since the time of our forefathers, we have not entered a police station."

This situation, however, underwent a change in August-September 2006. On August 8, 2006, some village goons allegedly abducted Kela's 14-year-old daughter when there were no adults in the Dom quarter. When Kela returned home, found his daughter missing and started making enquiries, the goons allegedly forced the Doms to stay inside their homes. "They closed the doors of our homes and threatened to beat us up if we came out."

For three days the Doms were prisoners in their own homes. Then, a group of them plucked up the courage to run out and cross the river that separates Nidhuwa from Chandpura, a PACS Programme village where the Paragilal Vidhyadham Samiti (PVS), a network partner of the Akhil Bhartiya Samaj Sewa Sansthan, has initiated an active local advocacy group known as a chingari sanghatan (to read more about chingari sanghatans click here).

One of the leaders of the Chandpura Chingari Sanghatan is Dwarka Prasad Dwivedi, a former pradhan (headman). Unlike Nidhuwa, Chandpura has no history of untouchability. "There are two Dom families in the village, and they face no difficulties," says Dwivedi. He was, however, aware that the Doms in Nidhuwa were being terribly ill-treated. "For two years I have been hearing stories about women being taken away and sold," he says.

When Dwivedi heard about the August 8 incident from the Doms who came to him for help, he immediately took them to Rajabhaiyya, founding head of the PVS. The first thing they did was lodge a police complaint. Then, Rajabhaiyya and members of the Chandpura Chingari Sanghatan visited Nidhuwa, gathered information about the Doms' plight and organised some media coverage.

Reports in Dainik Jagran and other regional and local Hindi newspapers, and a video clip on the ETV news channel, moved the district administration to take action.

The Doms, who had never received rations on their Antyodaya card, received 30 quintals of foodgrain per family, free of charge. For a community that earns between Rs 10 and Rs 30 per day, weaving and selling baskets, this was a windfall. Recalls Bimla, a woman whose daughter had got married a few days earlier: "For three days after my daughter left for her in-laws' home, I was crying because I didn't have any foodgrain to give her, according to our tradition. When the government gave us food, the first thing I did was send some to my daughter."

Under the district administration's instructions, eight Dom families also got possession of land allotted to them years ago - the allotments had been on paper only; no demarcation of plots had been done.

The PVS and Chandpura Chingari Sanghatan then decided to take a big step. They organised a sahbhoj, a community feast, in which the Doms would eat food along with members of other castes.

The initiative was not well received. Rajabhaiyya got threats on his cellphone and all efforts to find a suitable open plot for the sahbhoj failed.

But the PVS and Chandpura Chingari Sanghatan did not give up. The sahbhoj was finally held in Nidhuwa on September 3, 2006. Around 700 people, including many Brahmins, ate food with the Doms. Among those present on this occasion was PACS Programme coordinator Kiran Sharma.

The sahbhoj marked an important change in the Doms' lifestyle. Used to being treated as sub-human, they had been living in extremely unsanitary conditions. Under Dwarka Prasad Dwivedi's advice they cleaned up their quarter. They also got new sets of clothes, donated by well-wishers known to the PVS. Says Kamlesh Mehtar: "For the first time we felt as if we were living in a free country."

However, there is no room for exultation. While Chandpura's upper castes gladly came for the sahbhoj, their counterparts in Nidhuwa stayed away.

No progress has been made so far in the case involving Kela's daughter; there have been no arrests, and Kela's wife is still missing.

Kela and a few other Doms went all the way to Banda to speak to the superintendent of police (SP) on September 7. But the SP only had time for them on his way out of the office. Kela fell on the SP's feet, but when he was asked what the matter was he was unable to speak. An ETV journalist, Gulzar Ahmed, provided the details. The SP asked what caste Kela was and the caste of the people who had allegedly taken away his daughter - they belong to a backward caste. Then he casually asked: "Why should a backward caste person commit a crime against another backward caste person", took a petition prepared by the PVS, and went away in his car.

The district collector also displayed shocking callousness when, in conversation secretly videotaped in his office by Gulzar, he said that untouchability was a common, historical practice and that the fuss being made about Nidhuwa was a gimmick by CSOs that had "unaccounted money".

These statements, which were broadcast by ETV during the first half of September, drew loud and angry reactions from many quarters, including politicians. Apparently, to make up for his blunder, the collector announced another sahbhoj in Nidhuwa, to be organised by the administration on Gandhi Jayanti, October 2, 2006.

Dwarka Prasad Dwivedi puts the whole issue in realistic perspective. "We have made a four-anna difference. It will be years before we see any major change."

Kela and the other Doms who went to meet the SP know what they will do differently. "The next time we meet any officer we will not touch their feet."