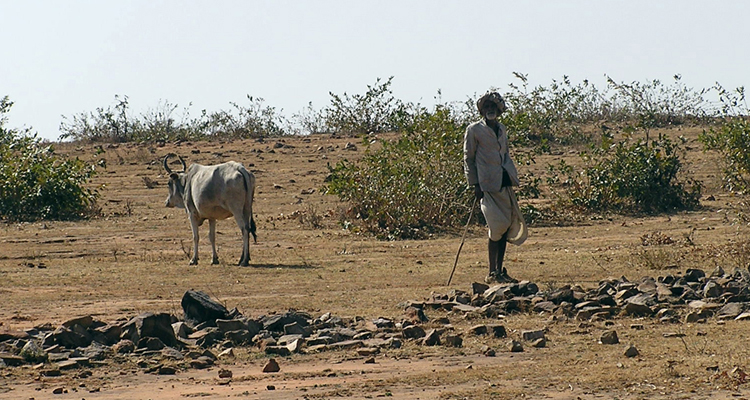 Most of the Patha region is barren with degraded forest, making life extremely difficult

Akhil Bharatiya Samaj Sewa Sansthan was founded by Gaya Prasad Gopal, now popularly known as Gopal Ji, or Gopal Bhai, in 1978. Before establishing ABSSS, he worked in different positions and vocations till he was exposed to the stark realities and miseries of the Kols while working as a Rural Development Coordinator with the Sri Sadguru Sewa Sangh Trust, Chitrakoot chapter, from 1975 to 1985. In those days, contract labour was at its peak in the Patha region. Even though the region was rich in a variety of natural resources, the social reality was that the Kols of Patha were virtually at the mercy of the dadus, who were coercive and feudal in their dealings with them.

Dressed in rags, the Kols would toil in the sun only to be pawns of the dadus, who would have no qualms in blaming the Kols for their own illegal activities and misdeeds such as felling forest trees, holding up trains, petty theft, poaching etc. The administration and the police usually protected the dadus rather than the Kols. Forced and bonded labour was widely practised and ensured that generation after generation of unresisting Kols lived a life of drudgery on their own lands which were commandeered by the dadus.

The dadus usurped these pieces of land by trickery and treachery. They showed pieces of paper that said the Kol owner was dead. Sometimes they used the gun to make their point, or a falsely created loan would serve as a means to gain possession; unable to pay back the contrived loan, the Kol was made to auction his land.

The sums owed were often as little as Rs 100, which was sufficient to hold a whole family of Kols to ransom for generations. If a Kol defaulted for any reason, such as being unwell, he was subjected to inhuman mental and physical attacks. It was thus virtually impossible for a Kol child to get an education.

Gopal Ji observed and was appalled by this situation during a tour of the Patha region in 1977. He visited, among others, the villages of Harijanpur, Sukhrampur, Panhai, Unchadih, Chamraunha, Sakarunha, Ranipur, upto the banks of the river Bardaha near the forest of Gidurha. He decided that he would dedicate his life to empowering this marginalised community. Encouraged and supported by friends and well wishers, particularly the district collector of Banda, Madhukar Gupta, he launched ABSSS.

It was an uphill task. The Kols were too frightened and isolated to trust anybody whom they saw as alien; they would literally run into the forest if confronted by strangers. ABSSS persisted in its efforts to build a rapport with them and in course of time began to take part in all aspects of their lives and gain their faith. As their self-confidence increased, the Kols started opening up. Stories of their plight were now no longer secrets of the dense jungle.

In order to formalise and authenticate the information, ABSSS conducted a survey of 5000 Kol families in five nyaya panchayats of Manikpur block, namely Umari, Rampur-Kalyangarh, Unchdih, Kihunia and Saraiyya. The outcome of the survey, coupled with their own experiences of interacting with the Kols convinced ABSSS that awareness generation and organisation building was the first priority, and would ultimately lead to an ideal life situation for other marginalised groups too.

ABSSS called this ant ka udai meaning ‘the rise of the last’.