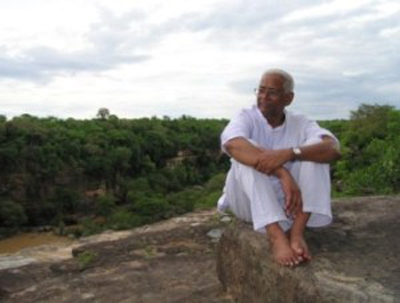 Gopal JiGaya Prasad Gopal, the founder of ABSSS, was born in a peasant's family in a small village named Bigahna in Banda district of Uttar Pradesh in 1941. His father Sri Mohanlal was a poor farmer, encumbered with loan and other monetary obligations; his mother Smt Devrati was a simple housewife who assisted her husband in rearing of their family of 10-12 members including their five children including daughters and three sons. Theirs was a non-Brahmin, low caste family as per the prevailing ludicrous caste stratification in India.

Village Bigahna utterly lacked in basic amenities like schools and hospitals. This made education a rare commodity for the village children. Of those parents who could value its long term importance and bear the resultant economic hardships managed to send their wards to the schools of nearby schools. Child Gaya Prasad Gopal was one of those privileged poor ones. However, he had to foot down everyday a distance of no less than 6 k through difficult, unmetalled roads to reach his school in Bilgaon, a nearby village, where he received his schooling till class 5th. As the school in Bilgaon did not offer education after class 5th, he got admitted to a school at Kurhanda for further education.

By this time the child Gaya Prasad had already acquired an appreciable fame for his talents in studies, singing, and recitation of the great epic the Ramcharitmanas which he so happily did during the village Ramlilas. These were his qualities which earned him endearments from the seniors and ladies of Bigahna and Bilgaon, which not only facilitated provisions for his further studies but also at times obstructed it inadvertently. It so happened that when the people of Bilgaon became aware of the graduating of Gaya Prasad from their village to the nearby one Khurhand to be admitted to a school providing higher education, they took it to their pride (as Gaya Prasad was a very prospective student and adept at singing and the recitation of the religious verses in their eyes, which he really was, and hence in his moving out from Bilgaon to Khurhand they somewhat experienced a sense of loss), and tried to fetch him back. But, because there was no general school after class 5th in Bilgaon, it was a bit of a problem. Nevertheless their enthusiasm earned them a solution. There was a Sanskrit school in Bilgaon where higher schooling was provided, which actually was for the wards of the high caste people. In their spirit of gaining him back, Bilgaon people showed a very progressive face to this and after much ado he was finally admitted in the Sanskrit school there. However, this collective broadness of their outlook was a short-lived one and opposition to Gaya Prasad's entrance to the Sanskrit school started stemming up from a few parents of the wards of the high caste. Soon the love of those who brought back Gaya Prasad was overpowered by the frowns of those who objected to the admission of a non-Brahmin to a school meant for the Brahmins only. This was actually the first experience of caste discrimination, which the child Gaya Prasad suffered for no apparent fault of his. This left an impregnable imprint on the child's sensitive mind as also a resolve perhaps to wage a battle against it in his later part of life. Fortunately, he was saved from this imminent looking disgrace of being turned out from the school as a Brahmin friend of his who was also a ward in the same school and whose father was an influential personality in the village became adamant on not going to school in case he is separated from his friend and classmate Gaya Prasad.

Another such experience of lowness he suffered during a village dinner when his eating together with the high caste Brahmin people was objected to by a few along them. It was of course a very humiliating and demeaning situation to be in. But here again he was saved from being disgraced due to a positive intervention made by a few of his well wishers from amongst those high caste Brahmins only.

In such inhuman encounters as portrayed above can we trace the early vestiges of an indomitable will that this man Gaya Prasad Gopal has shown in fighting inflictions of man upon man. Gaya Prasad did his 7th and 8th from Khurhand (which means after struggling for a year at the Sanskrit school at Bilgaon he once again shifted to Khurhand). From 9th till the completion of graduation from B.Ed. and even further, he remained in Atarra, a comparatively much bigger place than the earlier ones in the district of Banda.

Gaya Prasad Gopal who happened to be the first graduate of his native village had seen much of life's adversities even before reaching this milestone in life. Soon after completing his 12th he had to take up a job, fortunately a government one, to support his family. However, he could not continue here for more than a year as it was not comply to his personal value system and mindset. Four years to follow saw him work in different commercial shops in Atarra as their salesperson. The nature of job here was such as required of him to be involved in much unhealthy business practices. Also, there was little in it to gain for the social worker and activist in him which was ready to be unfolded and indivously sought expression. So, he decides to quit it even without knowing for sure what to do next. From here onwards his life starts to take on more confirming roles, confirming of course to his future stakes and statures.

Founding a school by the name of Adarsh Bal Niketan in Atarra in 1965 was a preliminary to his future experiments in social work. This period is a long one, of no less than 10 years between 1965 and1975 during which he worked as the principal of the school (of course as an editor of a newsletter also, as we would see later, from 1970 to 1975). It was an integral school where special care was taken to bring children of the poor, the rich, the low caste, and the high caste on one and the same platform so that the walls of man made artificial differences may not segregate our nation's future into localities and pockets of shrunk humanity. Such was the noble aim behind it and suitably it bore the name Adarsh Bal Niketan. To a speculative and reasoning mind the whole self-assumed project of founding and running a school with all that ideal may seem Sri Gaya Prasad's reply to the bizarre childhood experiences he suffered at the Sanskrit school of his neighbourhood village Bilgaon.

As if not satisfied with this much commissioning of his part of social accountability till then, he even went on starting and chief-editing a newsletter in 1970 by the name of Ajeya Durga (meaning 'an invincible fort') which he raised his concerns on various socio-political issues and problems till the closure of the newsletter in 1980.

The year of 1975 is a year to reckon with in modern Indian history. We all perhaps know why, as this was the year when the Emergency was imposed in India which caused all flurry and flutter in socio-political circles nationwide. The hamlet of Atarra in Banda (UP) was no exception to it and to all those who were known to be non-conformist and radical in their views and thoughts of the establishment there was the danger looming large of their being put behind the bars. Under the threat of this political crisis in the country Gaya Prasad Gopal had to be underground. This made him leave Atarra and move to Chitrakoot. This is how in short he was shipped by his circumstances to his land of action, his Karmbhumi.

Between the years from 1975 to 1985 he took up a job of Rural Development Coordinator with Sri Sadguru Sewa Sangh Trust, Chitrakoot chapter (a rural development outfit run and managed by Mafatlal business Gharana). This was the period during which he got intensively exposed to the stark realities and the miseries of the Kols who lived a life of endless drudgery and the denial of basic needs merely to support the luxury and the wasteful indulgence of a few of the dominant upper caste people knows as 'Dadus' in the local parlance. This sort of human life in practice was far from his imagination of independent India. It in fact set in motion a deep thinking process within him on what should be his share of the role and responsibility towards sharing and mitigating the woes of the Kols and extending a helping hand to them. He soon realised that for doing all as he imagined would be possible only if he was somewhat free to shape his vision of society into reality. And this line of thinking ultimately paved way for the formation of a society by the name of Akhil Bharatiya Samaj Sewa Sansthan, in sort ABSSS, which was registered on the 23rd of March 1978. Few knew that time that this was the beginning of a new chapter not only in the lives of the Kols of the Patha region of Chitrakoot but also in the life of Sri Gaya Prasad Gopal who had to undergo many trials and ordeals in the changed socio-political scenario of his life.