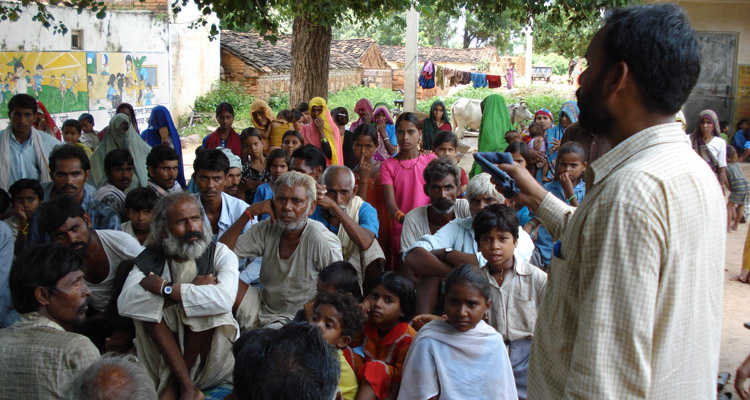 A view of gram sabha

In the Bundelkhand region, the gram sabha has not been effective because of interference from bureaucrats and dominant/influential individuals in panchayats. Dalit males/females are not allowed to take part in PRIs. Gram sabha meetings are not held regularly and members of gram sabhas have no knowledge of its role and function.

The local governance system in the hamlets populated by tribal and dalits is weak and ineffective because they have an incomplete understanding of how their participation in governance processes such as gram sabhas and other panchayati raj institutions can benefit them. This process has been benefiting others with better access to local-level planning who have been able to skim off the resources allocated for marginalised sections. The tribals and dalits need a better understanding of how their participation in local governance can help improve their own lives and livelihood.

ABSSS strongly feels that development, social justice/change, entitlement and rights of vulnerable dalits and women etc are heavily dependent on the integrity of elected panchayat representatives. Towards this end, it is adopting a multi-pronged strategy:

To sensitise the community, ABSSS uses many tools such as distribution of posters, stickers and pamphlets; wall paintings; debate competitions in schools; traditional media such as nautanki, nukkad natak, traditional folk songs, etc. Advocacy and lobbying is continuously done with representatives from the media, academicians, government officials and volunteers to share experiences, create awareness and build a better environment. Theme based trainings/camps/workshops are organised for capacity building and leadership development of panchayat representatives.